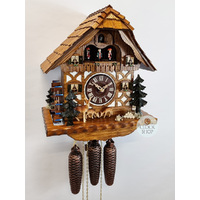 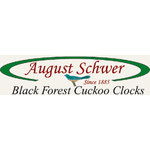 $1,476.00
Sold Out
Guaranteed Safe and Secure Checkout
Free shipping
over $400
Happiness
Guaranteed
Easy
Refunds
Notify me when back in stock

Produced In The Black Forest

This delightful 8 Day Mechanical Chalet Cuckoo Clock was created by German designer AUGUST SCHWER, who has been producing high quality cuckoo clocks in the heart of the Black Forest since 1885.

Measuring 34cm in height*, this endearing chalet style cuckoo clock portrays the scene of an alpine chalet in the mountainous woodlands of Germany. The chalet itself features a features a colourful forest scene that includes a number of deer and a water wheel outside the chalet amongst a couple of fir trees. Additional features of the chalet itself include a hand laid roof with individual wooden shingles, and a half timbered chalet facade. This fascinating scene also includes a wooden clock dial in the centre of the chalet, and hand painted details including flowers in the windowsills, and colourful dancers on a balcony above the clock dial. Rounding out this unique clock is a timber pendulum that hangs below the clock itself, alongside the weights. The clock has been designed with a beautiful walnut finish that is sure to suit a number of spaces.

Chalet cuckoo clocks are the most famous and common type of cuckoo clock, and are often shaped as alpine houses and feature carvings that represent life in the mountain region of Europe (mainly around Southern Germany, Switzerland and Austria). Chalet style cuckoo clocks can range from simple arrangements of carved features to very detailed scenes with many moving parts (known as automaton). The particular automaton for this cuckoo clock includes the water wheel and the dancers who twirl when the music plays, along with the two smaller deer directly underneath the dial who jump up and down as the clock chimes the time.

The in-built cuckoo of this beautiful clock calls the full time each hour and once on the half hour, with a manual override to silence the cuckoo altogether should that be preferred. There are two melodies that alternate with this clock after the cuckoo calls - Edelweiss and Happy Wanderer. These tunes are played on a high quality Swiss made music movement by Reuge. This delightful clock needs to be wound once a week and is sure to spark a sense of joy to whoever gazes upon the lovely scene.

This beautifully designed clock by SCHWER is a charming timepiece, suitable for those looking for a quality traditional cuckoo clock using carving methods that have been practised for hundreds of years.

Benefits of a Mechanical Cuckoo Clock

Each mechanical cuckoo clock will have either two or three weights; two weights for cuckoo only and three weights for cuckoo and music. One weight runs the clock movement and hands that show the time and the second weight drives the cuckoo calling mechanism. The cuckoo sound is produced using bellows that push air through two whistles creating the 'cook' and 'coo' sounds respectively. If you choose to also have music with your mechanical cuckoo clock, the third weight drives a traditional mechanical music box movement with a pinned cylinder that plucks notes on a 'comb' to produce a melody.

Why Shop at the Clock Shop?

Our small family run business has been standing in the same location since 1993, providing Australia with the number one option for consistent quality timepieces. Don’t believe us? Check out our company reviews!

If you’re looking to purchase an authentic German cuckoo clock in Australia, then we offer a large range of quality timepieces that add a German inspired atmosphere to your home.

When you purchase a cuckoo clock from us, you will be guaranteed a product that is authentic in origin, sourced directly from Germany, and crafted of the highest quality. These beautiful and unique hand carved clocks date back to the early 18th century and are still manufactured in the Black Forest region of Germany today.

A Guaranteed Product of Authenticity

Whilst we do our best to accurately capture all products to best represent their natural appearance, the colour and finish of this product may vary slightly from the images on our website.

*The measurements of the clock do not include the height of the weights or pendulum.

Standard Shipping - $0.00
Take advantage of our great shipping rates including FREE delivery for all orders over $400. Please note, while PO box deliveries are possible, we don't recommend this for large and/or fragile items. We use the most suitable carrier based on the item/s ordered and the delivery location. Express Shipping - Read notes* - $0.00
EXPRESS SHIPPING IS NOT FREE: Express Shipping is quoted once the order has been submitted. You can choose to pay for the product/s now and pay the shipping cost after the quote has been issued. Alternatively, please use the Shipping Quote payment option at checkout to defer any payment until the shipping quote has been received. Free pick-up in store - $0.00
Free pick-up from Clock Shop, 194 Main Street, Montville 4560. Mon - Sat 10am - 4:30pm, Sun 1pm - 4:30pm

More From This Category Make 4 interest-free payments of $95.25 fortnightly and receive your order now. Make 4 interest-free payments of $93.75 fortnightly and receive your order now. Make 4 interest-free payments of $148.75 fortnightly and receive your order now. 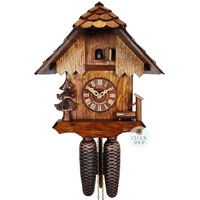 Make 4 interest-free payments of $168.50 fortnightly and receive your order now. Make 4 interest-free payments of $142.75 fortnightly and receive your order now. Make 4 interest-free payments of $481.25 fortnightly and receive your order now. Make 4 interest-free payments of $656.25 fortnightly and receive your order now. Make 4 interest-free payments of $322.50 fortnightly and receive your order now.